I watched her as she came up the beautiful stair case. She was tiny but beautiful. Her face held the same shocked look that I generally see on any newcomer’s face and in these last ten years I’ve seen thousands of them. She could not believe she had not been allowed to live. Her hope, dreams and joy had been dashed to the ground in a single surgical procedure.

She came near me perplexed and asked “why? What did I do?”

“You did not have the Y chromosome, so they aborted you” I replied as I was told when I first came up those celestial stairs.

(This is a tribute to those 20,000 daughters have gone ‘missing’ in Tamil Nadu in the last 10 years, according to the Campaign against Sex Selective Abortions (CASA). 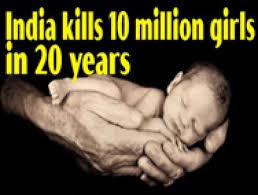